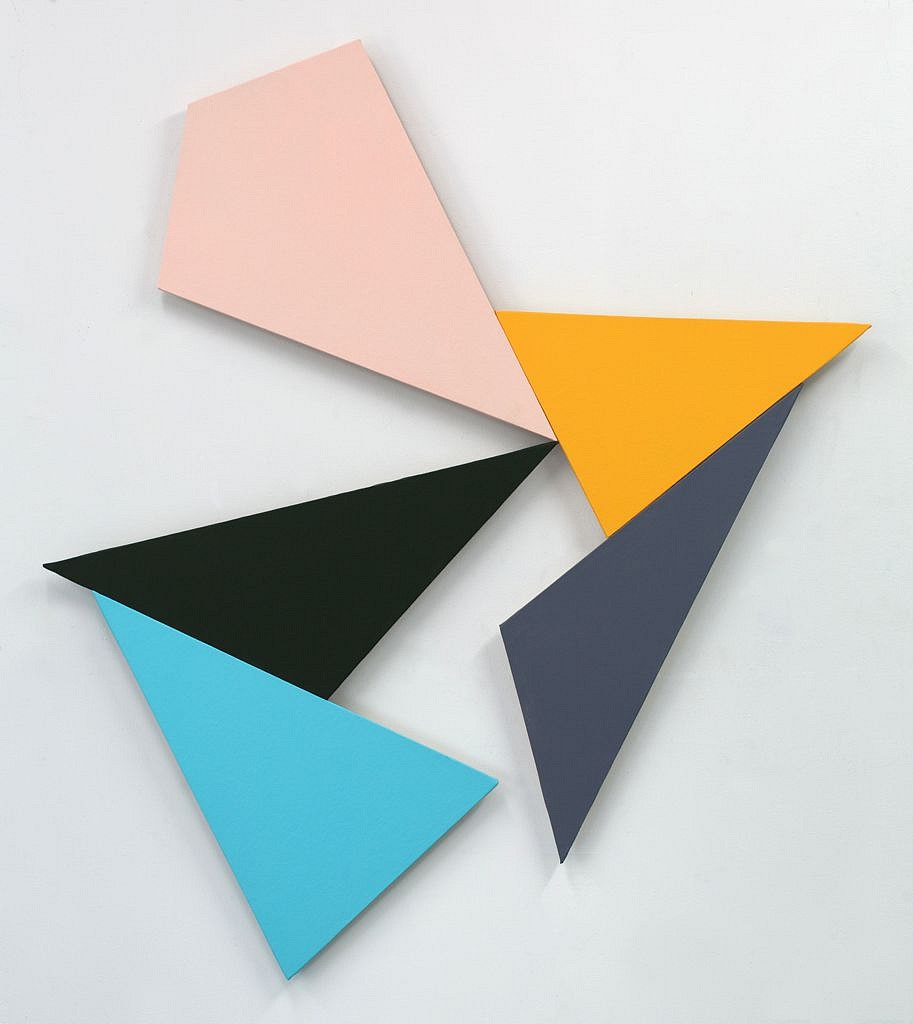 “ ‘Something’ takes its title from a painting I recently completed. My current body of work deals with questioning the role of art through enigmatic text and bright color. Using words like ‘Something’, ‘Everything’, ‘Kind of’ and ‘Sort of’, which have a playfulness and ambiguity,  allow the viewer to bring their own subjectivity to the painting.  The artists I have selected are relevant to these ideas in terms of investigating the roles of landscape and portraiture painting, pop-art, and post-war abstraction through an ambitious use of color, form and materials.  In this group show, I am featuring twenty artists, including myself, that are based in the United States and Europe. As an artist and curator, I gravitated towards making choices for this show in an intuitive way,” says Noah Becker.

New York-based, collage master, Michael Anderson creates large-scale works using found international street posters. Anderson reassembles these found posters through collage, making new associations through surprising compositions. Marc Dennis paints dramatic compositions inspired both by works from art history and popular culture. Visual puns and subtle humor breathe life into his hyper-realistic and strikingly detailed paintings with complex narratives. Based in Zurich, Switzerland, Andy Denzler has an extensive exhibition history and his work is held in many public and private collections throughout Asia, Europe, and the United States.   He paints with gestural approach in these large-scale, dramatic works to create photorealistic paintings frozen in time that still have a sense of motion. Ken Greenleaf is a committed modernist working in the minimalist tradition by building shaped canvases with studied color juxtapositions.  His work is widely collected in the United States and was recently included in the Portland Museum’s (Maine) Biennial.  Trevor Guthrie’s works are based on the sharp witted side of pop culture.  Using charcoal on large-scale paper, his works appear hyper-realistic in style, but. upon closer inspection, Guthrie’s works have a painterly quality that betrays mere photographic reproduction. Hillary Harrison, a graduate of the Memphis College of Art and Design and the AICAD/New York Studio Residency Program is a painter working on a series of brightly colored flower paintings with a sculptural build-up of their surfaces.  New York-based Nir Hod works in a variety of media to create highly stylized works, which create a visceral response as he addresses themes of excess, glamour, beauty, and loneliness.  Hod, who is represented by Paul Kasmin Gallery, New York, has had numerous international solo exhibitions, and has been written about extensively. Marcus Jansen creates massive canvases that are informed by the Graffiti art movement in 1980s New York.  By exploring paradoxes and also drawing parallels between the past and present, his expressive works explore the human condition and transform landscapes into critical social commentary in an era of globalization. His monograph “DECADE” will be published next month by Skira Editore in Milan. The artist and writer, Irena Jurek, is a fixture on the New York art scene. Her maximalist works infuse the real with the imagined, the autobiographic with pop-culture, to create powerful compositions with a surreal intensity.  The only sculpture in the exhibition are by John LaMacchia. The blue and white vases call to mind porcelain vessels from the Ming Dynasty, but the subject matter is ironic and humorous, allowing the viewer to laugh along with LaMacchia, as he questions the difference between advertising and art. Jason McLean a Canadian born and Brooklyn-based artist, is included in museum collections throughout Canada. His drawings are often considered “mental maps” based on the emotions of every day life.  For this show, Holly Knox Rhame , a graduate of the California Institute of Arts, has created a series of works on paper of Technicolor heads looking upwards into the abyss.  Lola Montes Schnabel creates painterly expressive works on canvas in a high key palette. Included in this show is an impressive painting entitled, “Heaven”. Marcia Scott, based in London, creates post-modernist works in which she investigates the play of color and form in space.  She refers to her works as windows into her subconscious, abstract paintings of her own self-portrait. Kentucky-based Aaron Michael Skolnick presents a series of burning crosses in colors inspired by Warhol’s shadow paintings with a historic relevance. Erin Smith finds beauty in mundane subjects and desolate imagery.  Abstraction looms in her vibrant pastel backgrounds, while playful imagery and childlike icons break through the foreground to give a sense of the narrative and an aspect of representation. Mike Solomon's new “Bokeh” series is based upon the photographic technique of blurring the focus (“Bokeh” means blur in Japanese). However, these are not photographs, but rather translucent paintings in resin and watercolor on papers. The pentagon shapes assemble and overlap as they float through space. Their ephemeral and transparent nature makes it so that, as they drift and gather, they blend and comingle their colors, shapes, and radiant energies iterate dust particles floating in deep space. Susan Vecsey stretches the boundaries between representation and abstraction, as generous washes of oil paint both reference the romantic horizon lines of Long Island and the elegant minimalism of her predecessors.  Guild Hall Muuseum, East Hampton, New York recently acquired one of Vecsey’s paintings.  New York-based James Walsh has long worked with a thickly applied paint and molding paste creating works that tip between order and unpredictability.