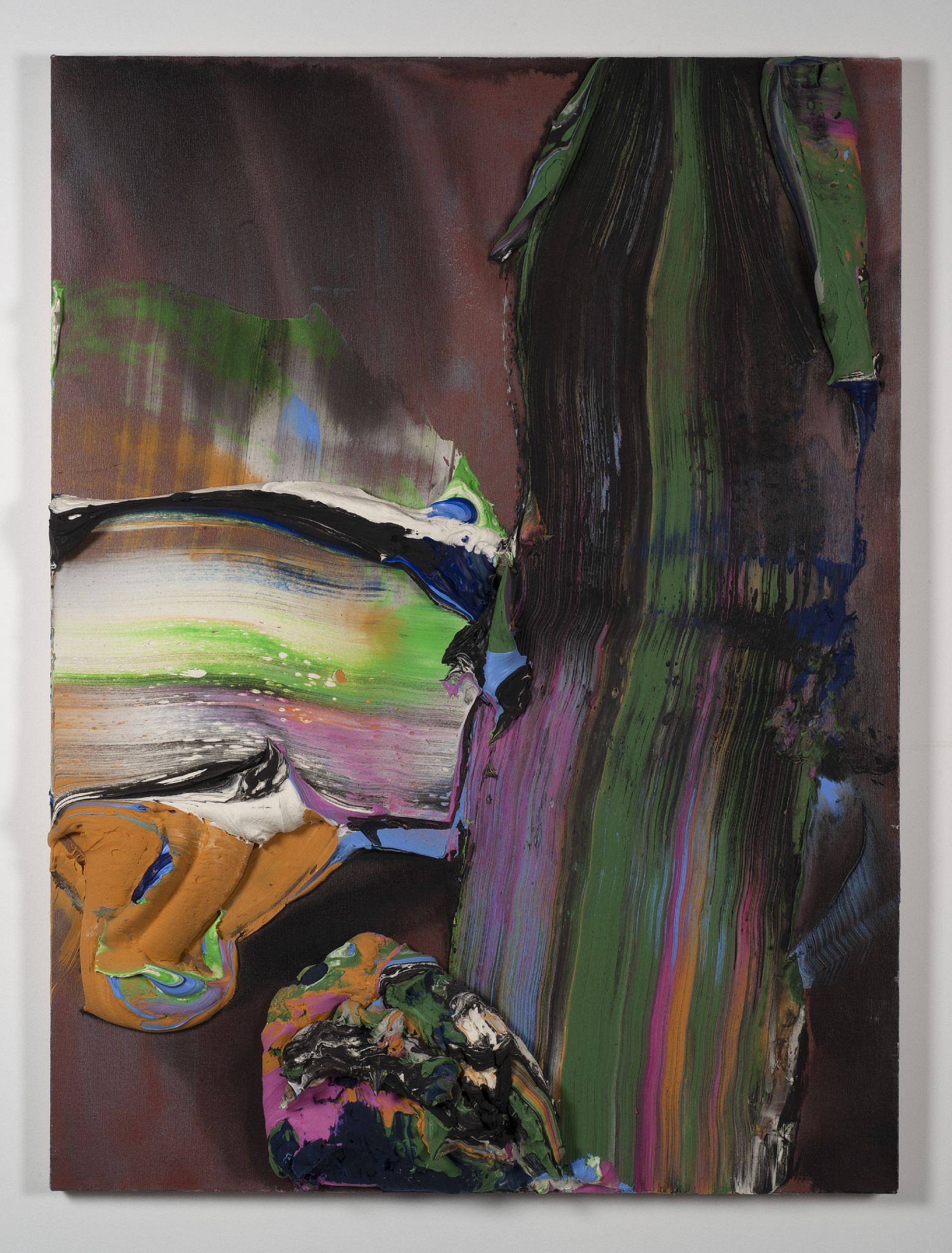 NEW YORK, NEW YORK, December 14, 2019—Berry Campbell is pleased to announce an exhibition of recent paintings by James Walsh (b. 1954), an abstract painter who has been an active member of the New York art scene since the early 1980s. Following in the Modernist tradition, Walsh relentlessly explores the properties and limits of paint and the results of his inquiry are spectacularly wide ranging. Experimenting with innovative acrylic formulas, Walsh produces large masses of pigment that project outward from the surface of the canvas, creating unusual forms in high relief. In some works, the paint is sculptural and three-dimensional, while in others, it rises from richly treated surfaces. Although Walsh makes specific compositional choices, the spontaneous appearance gives his paintings a feeling of the accidental. This exhibition is accompanied by a six-page brochure. JAMES WALSH: THE ELEMENTAL opens with a reception on Thursday, January 9, 2020 from 6 to 8 pm and will continue through February 8, 2020.

“Jim's style is something more like an anti-style. A Walsh is recognizable by its dramatic paint effects, usually with one or two veritable tidal waves of acrylic paint on an otherwise placid ocean of color. But formal commonalities end there. The only rule in play is continual reinvention from work to work. This means that color can vary widely, from acidic primaries to foggy neutrals. The applications range from gigantic brushwork to fluid pours. Surface effects include deliberate application of flat color next to mysterious laminations formed by transparent acrylic bases flecked with liquid paint.

It's a truism that reproduction doesn't do justice to good painting, but it's especially apt in Jim's case, as his canvases sometimes have crests of paint several inches thick adorning areas that have been stained, glazed, or scraped down to the cotton. Though hung on the wall and meant to be viewed from the front, many of them have a depth of six or eight inches. Crucial, though, is that Jim is employing the entire depth.

ONWARD NORTH (2018) exemplifies the range. A bulging mass of lime and powder blue intrudes from the left side, abutting an even greater mass with a prickly, tortured surface. A wad of green, orange, brown, and Burnt Sienna pushes up from below, with marks from the tool used for the shove evident as complex scalloping on the picture's surface. The lower right is a quiet, translucent blue beneath which one can see submerged ovals dispersing around the edges. A pearly coating has been poured across the middle and allowed to drip in what is now the upward direction of the painting.

OPEN A (2019)—note the guitar reference—is a simpler affair in which white paint smeared with Ultramarine and aqua pushes around a thick ridge of deliciously flat black in a big, graceful swirl. Hints of ochre, red, and yellow-green push in from the sides, remnants of earlier applications. But even without the numerous revisions of Onward North, he has generated the sort of complexity that one associates with Flemish altarpieces or landscape photography. One can just look and look into them, discovering more.

How to do this has always been a hard problem, and remains one. Lacking Jim's visual acumen and relentless making, abstraction itself offers no clue as to why one would execute any particular pour or smear or scrape at any given point on the rectangle. Too, composition of this much complexity is a gargantuan challenge. Consider Natural (2019), which contains a frosted sweep on the lower half with a coil of candy red poking through, stains of blue, pink, and green on the right, troubled mashes of various colors across the top, and a fat lip of white in the middle. Yet in aggregate, those four regions cooperate as distinct units, and the result is pleasingly simple. It looks like the product of outsize visual genius, and it also looks like there's nothing to it.

James Walsh has shown widely throughout the United States He had solo exhibitions at Flowers East in London, the Mendel Art Gallery up in Saskatoon, Saskatchewan, Baker Sponder in Boca Raton, FL and locally, over the years, at Galeria Joan Prats, Long Fine Art, and Berry Campbell Gallery. He was a fixture in Edmonton Contemporary Artists Society shows in the 1990s, and Richard Timperio's quixotic Sideshow exhibitions in Williamsburg throughout the 2000s. Notable two-person and group shows took place at the Edmonton Art Gallery, the Martin Brest Museum in Jacksonville, FL, the Saint-Gaudens National Historic Site in Cornish, NH, and the Portland (Oregon) Museum of Art as part of "Clement Greenberg: A Critic's Collection."

Christine Berry and Martha Campbell have many parallels in their backgrounds and interests. Both studied art history in college, began their careers in the museum world, and later worked together at Spanierman Gallery in midtown Manhattan. Most importantly, however, Berry and Campbell share a curatorial vision.

Both art dealers developed a strong emphasis on research and networking with artists and scholars during their art world years. They decided to work together, opening Berry Campbell Gallery in 2013 in the heart of New York's Chelsea art district, at 530 West 24th Street on the ground floor. In 2015, the gallery expanded, doubling its size with an additional 2,000 square feet of exhibition space.

Highlighting a selection of postwar and contemporary artists, the gallery fulfills an important gap in the art world, revealing a depth within American modernism that is just beginning to be understood, encompassing the many artists who were left behind due to race, gender, or geography-beyond such legendary figures as Pollock and de Kooning. Since its inception, the gallery has been especially instrumental in giving women artists long overdue consideration, an effort that museums have only just begun to take up, such as in the 2016 traveling exhibition, Women of Abstract Expressionism, curated by University of Denver professor Gwen F. Chanzit. This show featured work by Perle Fine and Judith Godwin, both represented by Berry Campbell, along with that of Helen Frankenthaler, Lee Krasner, and Joan Mitchell. In 2019, Berry Campbell's exhibition, Yvonne Thomas: Windows and Variations (Paintings 1963 - 1965) was reviewed by Roberta Smith for The New York Times, in which Smith wrote that Thomas, "... kept her hand in, adding a fresh directness of touch, and the results give her a place in the still-emerging saga of postwar American abstraction."

Collaboration has been an important aspect of the gallery. With the widened inquiries and understandings that have resulted from their ongoing discussions about the art world canon, the dealers feel a continual sense of excitement in the discoveries of artists and research still to be made.

Berry Campbell is located in the heart of the Chelsea Arts District at 530 West 24th Street, Ground Floor, New York, NY 10011. The gallery is open Tuesday through Saturday from 10 am to 6 pm.