Committed to abstraction throughout a career that lasted fifty years, Perle Fine maintained high ideals, never adopting a method to follow a trend or compromising when her work was outside the mainstream.[1] Although she experienced the barriers that limited the opportunities for women artists in the era—especially those who entered into the macho milieu of Abstract Expressionism—she held to her belief that it was painting itself that mattered, not who had created it. However, Fine’s achievement and that of other women of her time are now being given serious attention, such as in the June–September 2016 exhibition, Women of Abstract Expressionism, held at the Denver Art Museum. The show, including Fine’s work along with that of Mary Abbott, Jay DeFeo, Judith Godwin, Helen Frankenthaler, Sonia Gechtoff, Grace Hartigan, Elaine de Kooning, Lee Krasner, Joan Mitchell, Deborah Remington, and Ethel Schwabacher, was curated by University of Denver professor Gwen F. Chanzit.

One of six children, Fine was born in Boston in 1905 to parents who had recently emigrated from Russia. She began studying art while growing up in nearby Malden, Massachusetts. Before finishing high school, she took classes in illustration and graphic design at the School of Practical Art, Boston (she paid her tuition by working in the bursar’s office). In 1927 or 1928, she moved to New York City, continuing her training under Pruett Carter at the Grand Central School of Art. In 1930, she transferred to the Art Students League and studied there with Kimon Nicolaides, absorbing his method of combining spontaneity with an academic approach to figural modeling. The work of Paul Cézanne, however, was her greatest source of inspiration at the time. In the same year, she married Maurice Berezov, a fellow artist with whom she had become acquainted at Grand Central.

When Hans Hofmann moved his popular Munich art school to New York in 1933, Fine took the opportunity to enroll. Her classmates included avant-garde artists Larry Rivers, Robert De Niro, and Lee Krasner, who became her lifelong friends. Fine also attended Hofmann’s summer school in Provincetown. She did not exhibit her work actively during the 1930s, when Regionalism and Social Realism prevailed. By 1943, however, she had begun to gain recognition. That year she was awarded a grant from the Solomon R. Guggenheim Foundation; she would receive additional grants from the foundation in the years ahead. She also began exhibiting at Peggy Guggenheim’s Art of this Century Gallery and at the Museum of Nonobjective Painting (now, Solomon R. Guggenheim Museum, New York), then under the directorship of Hilla Rebay.

In 1945, Fine joined American Abstract Artists, a group founded in 1936 to give abstract art a voice in the United States by exhibitions, publications, and discussions. Through the organization, with which she exhibited through the 1970s, she became acquainted with many leading abstract artists, including Josef Albers, Fannie Hillsmith, Ibram Lassaw, Irene Rice Pereira, and Ad Reinhardt. She especially admired Reinhardt, finding his bravery inspiring. Her first solo exhibition was held in February ­and March of 1945 at the Willard Gallery on East 57th Street. By the end of the year, she was represented by Karl Nierendorf, who specialized in the German Blaue Reiter group. Nierendorf gave Fine a stipend and held shows of her art at his gallery in 1946 and 1947.

In 1947, Fine was asked by the collector Emily Hall Tremaine to make an exact copy of Piet Mondrian’s diamond-shaped Victory Boogie-Woogie, then in Tremaine’s collection (now in the Gemeentemuseum, The Hague) as well as to prepare a complete analysis of the painting, on which the artist had been working when he died three years earlier. Fine, who had come to know Mondrian after he emigrated to America in 1940, felt a deep reverence for his achievement. She executed her copy under the same conditions in which he had worked, including a pristine white-walled studio and with the same materials he had employed. In 1944, she had begun to create etchings, working with Stanley William Hayter. Her work in this medium was first shown in a group exhibition held that year at Wittenborn & Co., New York.

After Nierendorf ’s sudden death due to a heart attack in 1947, Fine was represented by Betty Parsons, whose gallery (opened in September of the year) had become the leading showplace for cutting-edge art in New York. Among the artists whose work she represented were Adolph Gottlieb, Hofmann, Ellsworth Kelly, Agnes Martin, Barnett Newman, Pollock, Reinhardt, Rothko, and Clyfford Still. In 1949, Fine was invited by de Kooning to join The Club, a group including Kline, Reinhardt, Philip Guston, and Elaine de Kooning. The artists gathered in an East Village loft for discussions and presentations by leading New York philosophers, art critics, and poets. Fine and Elaine de Kooning were two of the three female members in the group.

"By the mid-forties, Perle Fine’s work varied from extremely bio-morphic forms to works with more geometric scaffolding. She said that she wanted to create a “mood of the spirit” with forms that moved in “illusory pictorial space.” When Fine exhibited in the exhibition Réalités Nouvelles in Paris in 1950, she also stated her belief that modernism had benefitted from “a process of purification, [rejecting] all that was obviously pretty or puerile.” The modern artist, she wrote, “has made of as tangible an object as a canvas as intangible a spiritual work that it rightfully ranks with music, mathematics, and the logic of the ancients.” These views place Fine squarely in the center of Abstract Expressionism. Her combination of fluid and brushy rendering was an ideal mesh of personal agency and truth to materials for that style, and her use of biomorphic forms encased and intertwined with a softened and irregular geometric lattice places her in league with Gottlieb and Baziotes." [2]

In the late 1940s, Fine drew extensively from Cubist fragmentation as well as from the ideas of Hans Hofmann on the harmonics and formal tensions of color and shape. Fine notes, however, that she did not entirely agree with Hofmann’s artistic philosophy: “Hofmann kept relating abstraction to the figure and to nature, and I knew there was much more.” In the early 1950s, she moved in a new direction emphasizing color as an expressive means of its own. Rendered with staining and varying degrees of translucency, the serene, reductive compositions that resulted are suggestive of the works of Mark Rothko, with whom she was close at the time. However, she felt there was an essential difference between her art and Rothko’s. While acknowledging that both were creating “quiet complexes of color,” she felt she did not seek Rothko’s sublime transcendence. Instead she stated that she kept her focus on “the thing itself.”[3] Among the works from this time is a series she called Prescience, in which she filled large canvases with layered color, some seemingly below the surface and pushing forward, that has the ghostly quality of pentimenti. Her method still evoked the push-pull of Hofmann, but instead of gesture and color, it consisted of etherealized foreground and background shapes. She also brought a new sense of playfulness in biomorphic and organic forms that evoke the wit of Paul Klee and Joan Miró. Nonetheless, she stopped short of anything definitively referential so that the impact of her work elicits a meditative rather than an analytical response in the viewer. When one of her works was included in a group show at Betty Parsons in March 1952, The New York Times critic Howard Devree compared it with Nell Blaine’s “intricate upbuilding” in a scene suggestive of mountains, stating: “Perle Fine’s canvas has reached the utmost in economy in two areas of bluish-green bordering a sweep of white as if the shadow of a cloud had all but obscured a landscape.”[4] When Fine had a solo show at Betty Parsons in December of 1952, Lawrence Campbell called the works on view, “marks on the walls made by the smoke from a candle.”[5] Another reviewer mentioned that the “the weight of time taken plus their worked out simplicity” made these paintings “very quiet.”[6] While distinguishing her art from the mythmaking of Rothko, Fine realized that some of her more successful paintings had a “kind of myth in them.” For her, this quality was not “simply a matter of design.” She stated: “Sometimes just the way the paint was handled would give you a . . . sense of mystery in what appears to be a perfectly flat design, and another wouldn’t do at all. It’s very strange that it worked that way . . . It has to do with everything that’s there—and what isn’t there as well.”[7]

In 1954, Fine and Berezov built a one-room studio house in the woods in Springs, East Hampton, an area where they had often visited Krasner and Pollock. After the construction was complete, Fine decided to remain in Springs throughout the year, although she occasionally traveled into the city to see art and to install her work in exhibitions. In 1955, she became affiliated with Tanager Gallery, where she had solo shows through 1960.

In the late 1950s, Fine made intricate use of collage in her paintings, interweaving jagged scraps of paper, newspaper cutouts and aluminum and gold foil across white fields. In about 1961, she destroyed a show’s worth of her art and created a new group of works that she called the Cool Series. In accord with the Color Field movement, these reductive, vibrant, geometric images were praised when they were shown at Graham Gallery in 1963 and 1964.[8] In the mid-1960s, Fine created a series of painted wood reliefs in which the parts were fragmented yet formed a cohesive totality.

From 1962 until 1973, Fine served as an Associate Professor of Art at Hofstra University, Hempstead, Long Island, where a ten-year retrospective of her work was held in 1974 following her retirement from teaching. Begun about 1970, Fine’s Accordment series included drawings, gouaches, and oils, in which she utilized Mondrian’s grid construction as a framework for overall shimmering surface effects. This group of paintings is a culmination of all of the modes of painting that came before. Fine named the series “accordment” meaning “an agreement” or “acceptance.”[9]

Kathleen Housley states in her seminal book, Tranquil Power: The Art and Life of Perle Fine: “Close in age and in temperament, Fine and [Agnes] Martin shared many similarities, one being that their art was routinely described by critics as ‘atmospheric’ and ‘classic.’”[10] The two artists appeared together in a group show at the Whitney Museum of American Art in 1962 called Geometric Abstraction in America.  Perle Fine’s grids are set apart from minimalist tendencies by using colorful lines, planes of color, and sweeping brushstrokes. Housley states: “Fine’s unique strength was, and always had been, her use of color.”[11].

Fine exhibited her work extensively in solo and group shows. Following her death from pneumonia in 1988, she was featured in solo exhibitions at the Pollock-Krasner House and Study Center, East Hampton, New York (2005) and again at Hofstra in 2009. 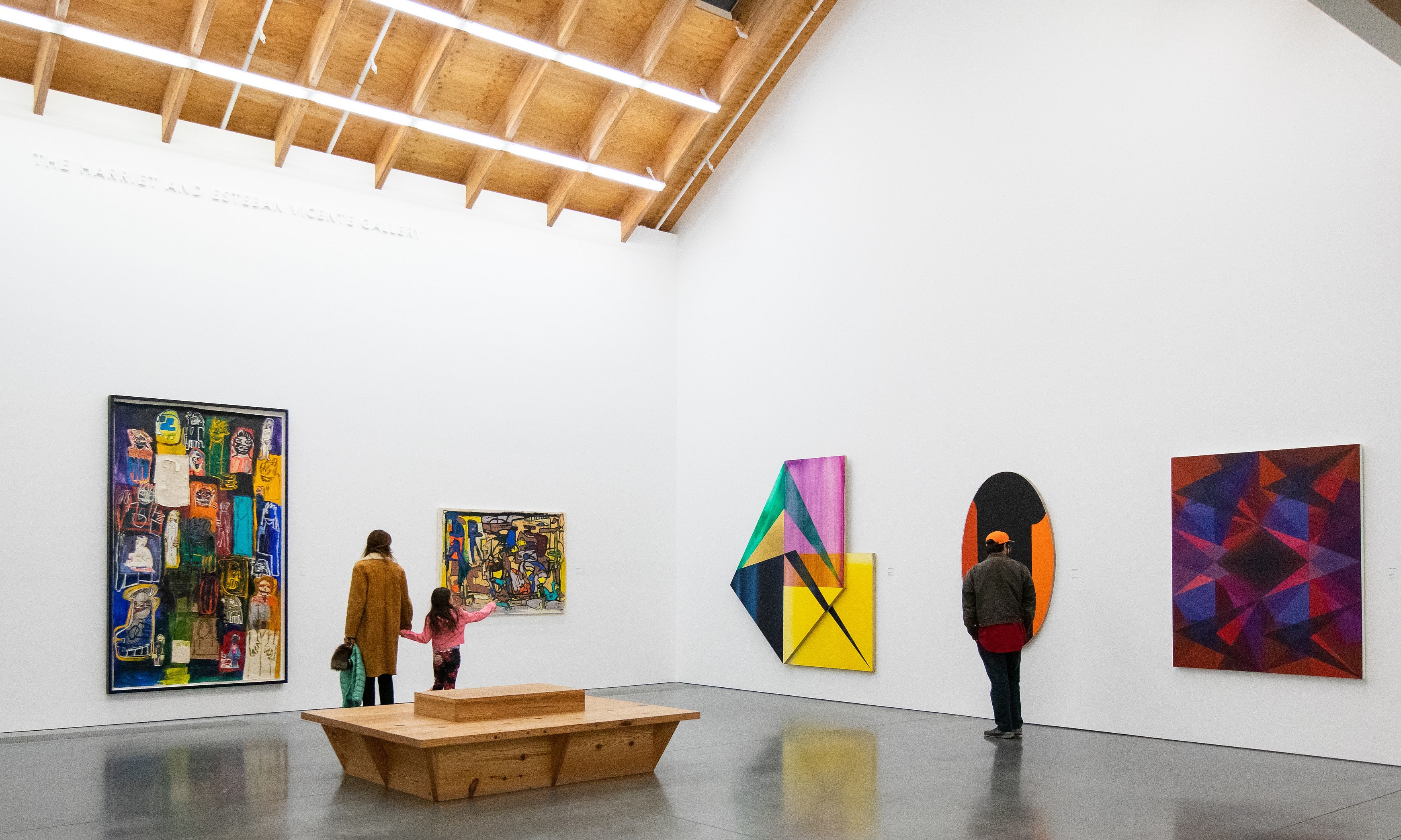 Parrish Art Museum | TALK: THE CURATORâ€™S VIEW: Alicia Longwell on Women Artists in What We See, How We See

What do Elaine de Kooning, Monir...

The essay for Joan Marter’s exhibition...