A pioneering figure in the development of American geometric abstraction, Gertrude Greene was active as both a painter and a sculptor. One of the first American artists to explore such progressive concepts as Constructivism, Suprematism, Neo- Plasticism and Surrealist biomorphism, Greene's work was admired and collected by a number of her contemporaries, including fellow artists Albert E. Gallatin and George L.K. Morris.

A native of Brooklyn, New York, Greene studied sculpture at the Leonardo da Vinci Art School in Manhattan from 1924 until 1926. In 1926 she married the painter Balcombe Greene. For the next five years the couple divided their time between New York, Vienna and Paris, familiarizing themselves with the latest currents in modern art.

Greene and her husband returned to New York permanently in 1931. In the years ahead, she developed a reputation as a leading proponent of non-objective art. In addition to producing free standing sculpture and constructivist-inspired wood reliefs, Greene also executed many collages, often combining both organic and geometric forms. Towards the end of the 1930s, influenced in particular by the work of Naum Gabo and Piet Mondrian, her work assumed an even greater degree of abstraction. In 1937, Greene's wood relief Composition (Berkshire Museum, Pittsfield, Massachusetts) was purchased by Gallatin for his Museum of Living Art, the first of her works to enter a public collection. During her later years, Greene focussed her attention on "palette-knife paintings," acclaimed by the critics for their rich textural qualities and sensuous color.

Greene was one of several vanguard artists, among them Alice Trumbull Mason, Ilya Bolotowsky and Rosalind Bengelsdorf, who founded the American Abstract Artists group in 1936. She was also a founding member of the Federation of Modern Painters and Sculptors, the Sculptors Guild and the Artists' Union.

In New York, Greene had important solo exhibitions at the Grace Borgenicht Gallery (1951) and at the Bertha Schaefer Galleries (1955). After moving to Pittsburgh in 1942, Greene continued to maintain a studio in Manhattan, to which she commuted on a regular basis. She died of cancer in New York in 1956.

In conjunction with the growing interest in American abstract art of the 1930s, Greene's work has attracted the attention of many scholars and critics. Since the late l970s, she has been the subject of numerous articles and studies. Greene was also included in the landmark exhibition Abstract Painting and Sculpture in America, 1927-1944, organized by the Museum of Art at the Carnegie Institute in Pittsburgh (1983). Examples of Greene's work can be found in major public and private collections throughout the United States, most notably the Museum of Modern Art in New York and the Philadelphia Museum of Art. 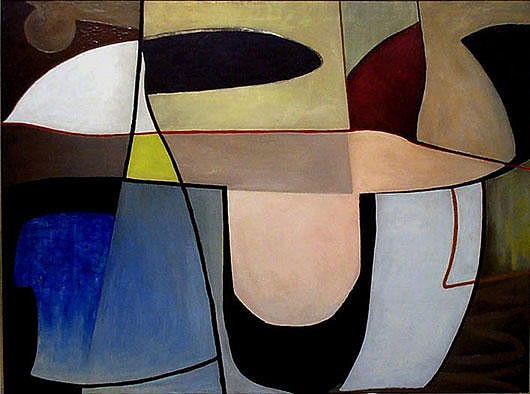