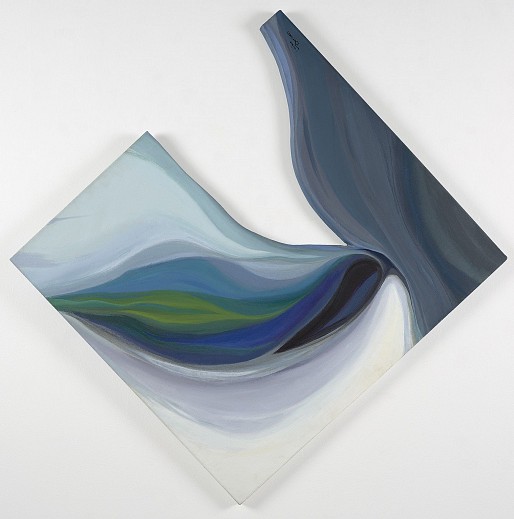 Culture Type | At 93, Lilian Thomas Burwell is Making Her Solo Debut in New York Where Her Artwork Will Be on View at Berry Campbell Gallery

An abstract artist, Burwell makes nature-inspired paintings and sculpture. She was featured in “Magnetic Fields: Expanding American Abstraction, 1960s to Today,” a groundbreaking exhibition presenting works by 21 Black female artists that originated at the Kemper Museum of Contemporary Art in Kansas City and traveled to the National Museum of Women in the Arts in Washington, D.C., and the Museum of Fine Arts, St. Petersburg, Fla., from 2017 to 2018. Burwell is also the subject of a recent documentary, “Kindred Spirits: Artists Hilda Wilkinson Brown and Lilian Thomas Burwell.”

“The exhibition centers on the painting Skybound (1984), which marks the first time that the artist cut into her canvas, creating positive and negative space. This pivotal act gave way to Burwell’s examination of form, bringing forth Burwell’s signature style of three-dimensional, painted wall sculpture. These wall sculptures would become the artist’s signature focus for more than two decades.”

BORN IN WASHINGTON, D.C., Burwell grew up in Harlem and attended New York’s High School of Music and Art. Still struggling to recover from the Depression, her family returned to the nation’s capital and she graduated from segregated Dunbar High School.

Burwell attended Pratt in New York City and later earned an MFA from Catholic University in Washington (1975). After working as a publications and exhibits specialist at the Department of Commerce, she became a master teacher of art in the D.C. public schools. She taught from 1967-1980, the last five years at Duke Ellington School of the Arts.

The documentary “Kindred Spirits” focuses on Burwell and her aunt, her mother’s oldest sister, Hilda Wilkinson Brown. Based in Washington, Brown was a teacher and an artist who made modernist paintings with local scenes as her subject. Burwell said Brown was like a mother to her. She supported her desire to become an artist and convinced her parents to let her pursue it.

Burwell, an educator like her aunt, has said she decided on a teaching career in order to have a foundation to support her artistic practice. “I know that I would not be who I am today if it had not been for her influence and her nurturing,” Burwell said about Brown in the documentary.

In 1997, Hampton University Museum presented Burwell’s 30-year retrospective. “From Painting to Painting as Sculpture: The Journey of Lilian Thomas Burwell” was accompanied by a fully illustrated catalog. The volume includes “Soaring With a Painterly Voice,” an essay by David C. Driskell (1931-2020) that inspired the title of the Berry Campbell exhibition. (Driskell and Burwell met in the early 1960s at Catholic University.) At the conclusion of his text, Driskell wrote: “What we see in Burwell’s work is neither traditional nor literally symbolic in an iconic sense; it is transcendental in showing stylistic diversity of earthly beauty and cosmic vision.”

“What we see in Burwell’s work is neither traditional nor literally symbolic in an iconic sense; it is transcendental in showing stylistic diversity of earthly beauty and cosmic vision.” — David C. Driskell

BERRY CAMPBELL was established by Christine Berry and Martha Campbell in the Chelsea neighborhood of Manhattan in 2013. The two worked together at a large Midtown gallery and when it closed they decided to strike out on their own.

In an interview with Surface magazine last year, Berry said: “We discovered a gap in the Chelsea art scene: a few galleries showed artists that were well-respected back in their day, but for whatever reason—whether it was race, gender, or geography—they had fallen off the map. We felt that our role could be bringing these postwar and abstract expressionist artists back to the forefront by telling their stories and showcasing their contributions to the movement.”

Berry Campbell is hosting solo shows of three under-recognized African American artists this year. Collages by Queens-based Frank Wimberley are currently on view at the gallery. After Burwell’s exhibition, a fall show curated by Lowery Stokes Sims will focus on Frederick J. Brown (1945-2012).

Today, Burwell lives and works in Highland Beach, Md., a small town on the Chesapeake Bay founded in 1893 by Charles Remond Douglass (1844-1920) and his wife Laura Douglass. Charles was the youngest son of Frederick Douglass. When Highland Beach was incorporated in 1922, it became the first African American municipality in Maryland.

Burwell wrote about her practice in her retrospective catalog, authoring an extensive essay titled “The Journey.” She shared how her practice developed over the years, how she expresses herself and approaches her work.

“My art has been shaped by my history and my belief system. I find that the circumstances and philosophy of life as it continues to evolve are no more or less important in shaping the work than the actual material components. Evolution is usually seamless, but I do recall making a conscious decision at one specific time that affected my work profoundly thereafter,” Burwell said.

“I remember deciding that I must at least try to do work that presented the beautiful, or at least elicited a feeling of beauty, as well as of peace and hope, all which run concurrent with or beyond whatever stark reality exists.” CT

“Lilian Thomas Burwell: Soaring” will be on view at Berry Campbell Gallery, April 22-May 28, 2021. A new catalog with an essay by guest curator Melissa Messina will accompany the exhibition and during the run of the show, the gallery will digitally screen the documentary “Kindred Spirits: Artists Hilda Wilkinson Brown and Lilian Thomas Burwell,” on Wednesday, April 28, 2021, 4-10 p.m., and May 8, 2021, 1-5 p.m.

READ MORE about Lilian Thomas Burwell at an artist panel about African American art in 20th Century Washington, D.C., hosted by CASVA at the National Gallery of Art on Culture Type