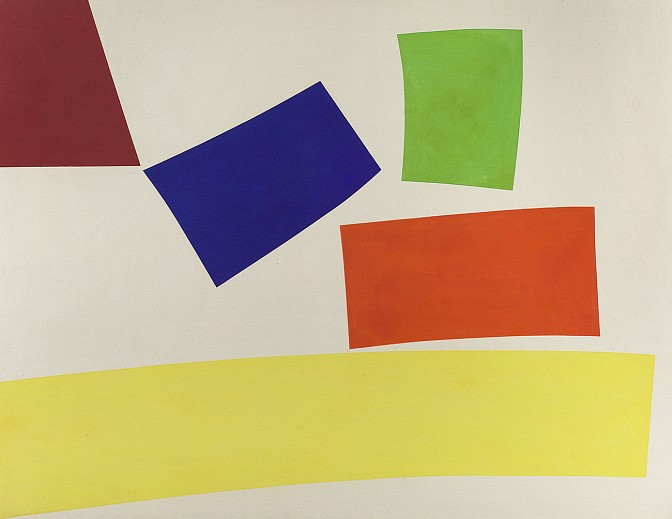 December 2, 2015 - Piri Halasz for (An Appropriate Distance) FROM THE MAYOR'S DOORSTEP

The 49th Parallel too often functions like an invisible sound barrier: few Canadian artists have been able to become well-known in the U.S. But the splendid Saskatchewan painter William Perehudoff has been posthumously making himself into one of those happy few—first, two years ago, and second, now.

In October 2013, when Berry Campbell opened their gallery in Chelsea, their inaugural show was Perehudoff’s color field paintings from the 1980s. Many people since have asked to see more of his work.

In response, this autumn Berry Campbell offered “William Perehudoff: A Retrospective,” with 25 paintings and works on paper made between 1968 and 1997 (closed November 21).

As for this most recent show, though the painting from 1968 and the one from 1997 were both excellent, and some of those from the 70s were admirable, the sixteen works from the 1980s, almost all delectable, were really what made me cheer.

Instead, he was creating bright, always radiant and sometimes positively bouncy pictures with vivid color contrasts and only the occasional (though always dramatic) dash of gel. These paintings can often give the viewer a lift—being somehow as free and open as the prairie skies.

Into their creation Perehudoff put far more than the experience implied by the 1968 start date of the Berry Campbell show. By 1968, he was already 50, and had been exhibiting his work since 1945.

Born in 1918, he was raised on a farm not far from Saskatoon. His parents were Doukhobors—which is to say that they belonged to a Russian pacifist sect forced by Czarist persecution to immigrate en masse to Canada in 1899.

Young William did his share of the farm chores, and was to remain close to the land, working the farm until he was a very old man.

As a youth he also completed eleventh grade, and learned enough about picture-making from local artists to have two representational paintings in a 1944 group exhibition at the Saskatoon Art Centre.

Two more were included in the SAC’s 1945 group show, and reproduced in the Saskatoon Star-Phoenix. The reviewer called Perehudoff “one of the most promising artists in the show.”

Further education included art books; a summer in Colorado, studying with a devotee of the Mexican muralists; a winter in New York studying with the French Purist, Amédée Ozenfant; and travels throughout Europe.

During this period, he also completed two major mural cycles for a Saskatoon art patron, Fred Mendel; they were installed in the plant of Mendel’s meat-packing company.

The first cycle was done in the later 1940s, and depicted workers engaged in meat-packing in a style reminiscent off Diego Rivera or José Clemente Orozco.

The second, done in 1953, had paler colors, more open space, and human figures in a simplified cubist style that Ozenfant would have recognized.

Perehudoff’s conversion to pure abstraction took place around 1962, and thanks to a summer artists’ workshop at Emma Lake, about 120 miles northeast of Saskatoon.

Founded in 1955 by two Canadian painters who wanted to know more about what was happening elsewhere, Emma Lake invited Barnett Newman to be its leader in 1959, Clement Greenberg in 1962, Kenneth Noland in 1963, and Olitski in 1964.

Although Perehudoff’s 1968 painting in this show consisted of floating patches of color, by the 70s he had evolved into pictures with vertical stripes, not unlike those of Gene Davis.

Next his vertical stripes began to blend into each other, creating a soft, gauzy surface unlike anything Davis ever did. Some of these were quite attractive, too.

However, my favorite part of the show was its first gallery, with four good-sized paintings from the 1980s, three of them truly memorable.

One was “AC-89-024” (1989). In its middle was a large, curved, brown-and- yellow, hollowed-out shape. Nested in this shape’s pale center were brightly-colored vertical strips, while the whole was surrounded by a deeper but more watery field of blue. So unexpected!

A second painting that also got to me here was “AC-87-121” (1987). It was much darker, but in its own way, equally memorable. The sprayed-on center was dark, but surrounded by four brighter, narrow bands heightened with gel—pale green, gray, light blue and pink. Smack in the center was a blue blob.

The simplest and most powerful painting hung on the wall directly across from the entrance. This was “AC–84-88” (1988), eight feet across and stunning because it was so classically uncluttered.