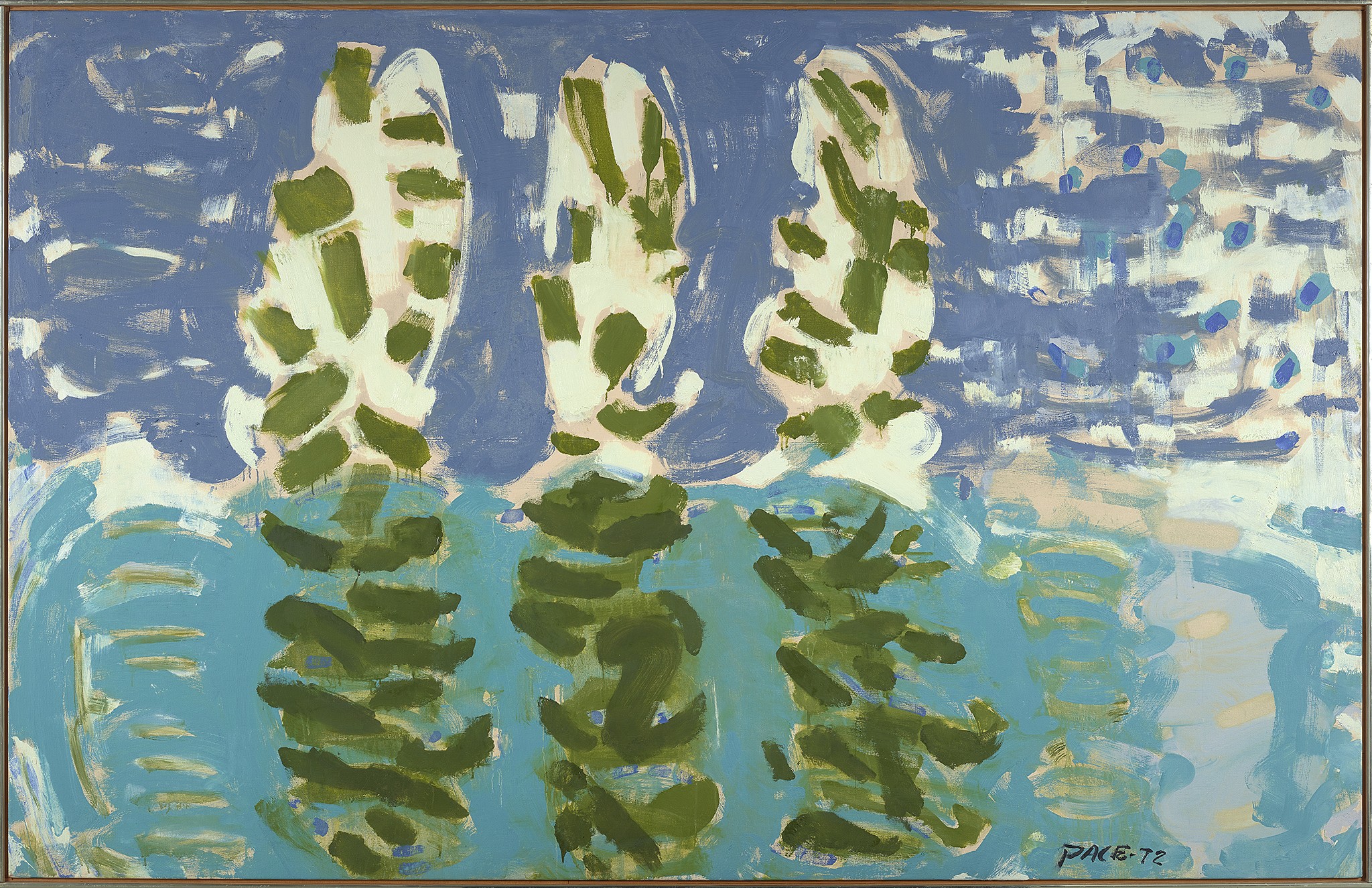 NEW YORK, NEW YORK, MARCH 12, 2019—Berry Campbell Gallery is pleased to announce an important exhibition of representational paintings by Stephen Pace (1918-2010). Stephen Pace: Reflections is a survey spanning fifty years of the artist’s career, including eighteen paintings and works on paper. Though noted as a significant second-generation Abstract Expressionist from 1949 to 1962, Stephen Pace painted representational imagery grounded in minimalism, using broad brush strokes and negative spaces to create lively Post-Impressionist inspired scenes of everyday life. The exhibition will open with a reception on Thursday, March 21, 2019 from 6 to 8 pm and continues through April 20, 2019.

Berry Campbell is pleased to represent the Estate of Stephen Pace.

Additionally, Berry Campbell, along with the Stephen and Palmina Pace Foundation, have organized the exhibition, Stephen Pace and Provincetown, in conjunction with the Provincetown Art Association and Museum, Massachusetts. This exhibition will focus on Pace’s time in Provincetown studying with Hans Hofmann. The show will open at the museum on July 12, 2019 and will run through September 1, 2019.

In 1961, the noted critic Thomas Hess recognized Stephen Pace’s place as an Abstract Expressionist, writing in the introduction to a show of his work: “Pace is a brilliant member of the second generation of New York School painters [who] burst on the scene in the early 1950s, fully made, as if from the forehead of the Statue of Liberty.” 1 Helen Frankenthaler, Grace Hartigan, and Milton Resnick were among the other artists Hess had in mind. As art historian Martica Sawin noted of Pace’s art of this time: “The brush dragged across rough underpainting, the strategic drip, the brusque cancellation of any suggestion of latent image or defined shape, the look of struggle built into the layers of paint, the breaking apart of anything that might hint at order—these are all hallmarks of the work of the younger Abstract Expressionists.” 2

Just after his inclusion in a major show in Cleveland, Stephen Pace turned his attention from abstraction back to representation. In the 1940s, Pace painted in a traditional language, rendering still lifes and portraits. After studying with Hans Hofmann, he moved into the world of non- objective painting. Inspired by several trips to Maine and longing to return to his roots, Pace began painting representational imagery defined by Martica Sawin as “Minimal Figuration.”3 His subject matter references his visits to Maine, where he lives for much of his life, his youth in Indiana and Missouri, along with reclining nudes and flowers. This post-1962 style is characterized by remnants of his Abstract Expressionist brushwork, broad and bold planes of color with large areas of negative space, which results in lively Post-Impressionist scenes inspired by everyday life. This is the manner in which he would continue to paint for over fifty years.

Of his post-1962, representational work, Peter Frank writes for 57th Street Review: “When, after a long period of relative invisibility, Stephen Pace had a solo show in New York – June of 1964, if I remember correctly, at Howard Wise – there was a great commotion over the fact that he was painting, gasp, figures! Not that figure painting had become so rare, especially not by then. Pace had been a promising member of the Abstract Expressionists’ second generation; it was not his conversion to representation that raised eyebrows, it was the kind of representational work he was doing. Pace had not thrown in his lot with the Pop artists or any other such New Imagists. Nor, however, had he taken up the restrained impressionism—such as that of Fairfield Porter, Elias Goldberg, Nell Blaine, and others—which has characterized a large and significant segment of New York painting since the second world war. No, Pace was insisting on having his cake and eating it, too – painting different things in the same way he used to paint. Pace painted his people and animals and buildings just as he had painted abstract forms and fields, maintaining various aspects of his Abstract Expressionist style: the large formats, the vivid, right-out-of-the-tube color sense, and the painterly stroke that bespoke not just the hand’s motion, but the whole arm’s.”

Born in Charleston, Missouri, Stephen Pace spent his early years working on his family’s farms in southeastern Missouri and Indiana. However, art was always part of his life. As a child, he used available materials—elderberries, coffee, or house paint—to paint on tin, glass, and even barn windows. At age seventeen, he received his first art instruction from WPA artist and illustrator, Robert Lahr. Called up by the military in 1939, Pace served first at Camp Lee, near Petersburg, Virginia, and then in England, where he was pulled from the infantry to design chemical-resistant clothing and produce war-related posters. In 1944, he was reassigned to the Seine Base Engineers, arriving in Paris just after the Germans withdrew. One day, while drawing along the Seine, he made the chance acquaintance of Gertrude Stein. She took him to Picasso’s studio and invited him to her home, introducing him to Picasso, Braque, and Dufy.

After the war, Pace furthered his study of art on the G.I. Bill, enrolling at the Instituto Allende in San Miguel Allende, Mexico. There, he took a class in fresco from a former assistant to Diego Rivera and, in another chance encounter, met Milton Avery, who was visiting Mexico with his wife and daughter. Pace would become one of Avery’s closest friends; he and Mark Rothko were the only speakers at Avery’s memorial service in 1965. Pace moved to New York in 1947, settling into a cold-water flat on Mulberry Street in Little Italy and studying at the Art Students League under Morris Kantor and Cameron Booth. He soon began frequenting the Cedar Bar in Greenwich Village, where he met and engaged in discussions with Franz Kline and other Abstract Expressionists. Through Avery, with whom he reconnected, Pace got to know Rothko, Barnett Newman, and Adolph Gottlieb.

Shortly after marrying in 1949, Pace went to Europe with his wife Palmina Natalini (Pam). Supported further by the G.I. Bill, he studied in Paris (at the Académie de la Grande Chaumière) and in Florence (at the Instituto del Arte)—in Paris he shared a large studio with other American veterans, including Sam Francis and Frank Lobdell. Pace returned to New York in the fall of 1951. With a few months remaining on the G.I. Bill, he enrolled in Hans Hofmann’s school; he later studied with Hofmann in Provincetown, Massachusetts. Pace felt an immediate affinity with Hofmann, who, in turn, viewed Pace as one of his prize pupils. Hofmann stated this in a 1959 article in Look Magazine. 4 In an exhibition catalogue statement for a two-person exhibition of Stephen Pace and George McNeil, Hofmann comments, “most sincere congratulations to such magnificent choices in great contemporary talents...two remarkable painters with great plastic imagination and immense vitality and inventiveness in the realm of color.” 5 When Hofmann’s classes became so popular that it was difficult for him to give students individual attention, he visited Pace’s studio to critique his work in person. In his art, Pace extended Hofmann’s ideas of the tension between volume and surface to vivid compositions in which he explored ways of making forms as free as possible without allowing them to lose their sense of belonging and confinement in their given formats. Dore Ashton wrote in 1960, that in Pace’s abstractions, on view at Howard Wise Gallery, “energetic elements battle their way to equilibrium. No matter how baroque Mr. Pace’s compositions are—and they are nearly all fretted with tilting and bucking forms—they do, ultimately come to rest.” 6

From 1953 to 1961, Pace was often included in annuals at the Whitney Museum of American Art, exhibiting alongside Kline and Hofmann. In 1954, he was represented in the third annual exhibition at the historically important Stable Gallery. His friendships with Willem and Elaine de Kooning and Jackson Pollock may have developed from the Stable show in which their work was also included. When Pace had a solo exhibition in 1954 at Artists Gallery, the poet and art critic Frank O’Hara stated in Art News: “He doesn’t cultivate a ‘look’; some paintings have a delicate breathy surface with ominous dry light behind, others are more outgoing in their organization and move in a public, rhetorical manner.” 7 Sawin wrote in the same year: “Lavish with both paint and energy, Stephen Pace employs jumbled layers of color, scumbled, splattered and overrun by lines and dribbles in a burst of disorder and chaos. The shapes which dimly emerge amid the tumultuous jostling are of a biomorphic character reminiscent of Gorky, but painted with a freedom and abandon which has a dizzying effect.” 8 Pace exhibited at Poindexter Gallery, New York, in 1956 and 1957, and from 1957 to 1966 at HCE Gallery in Provincetown. In 1959, he accepted the first of many teaching jobs at Washington University, taking a post just vacated by Max Beckmann. In 1960, he was included in an important exhibition of contemporary abstraction at the Cleveland Art Museum.