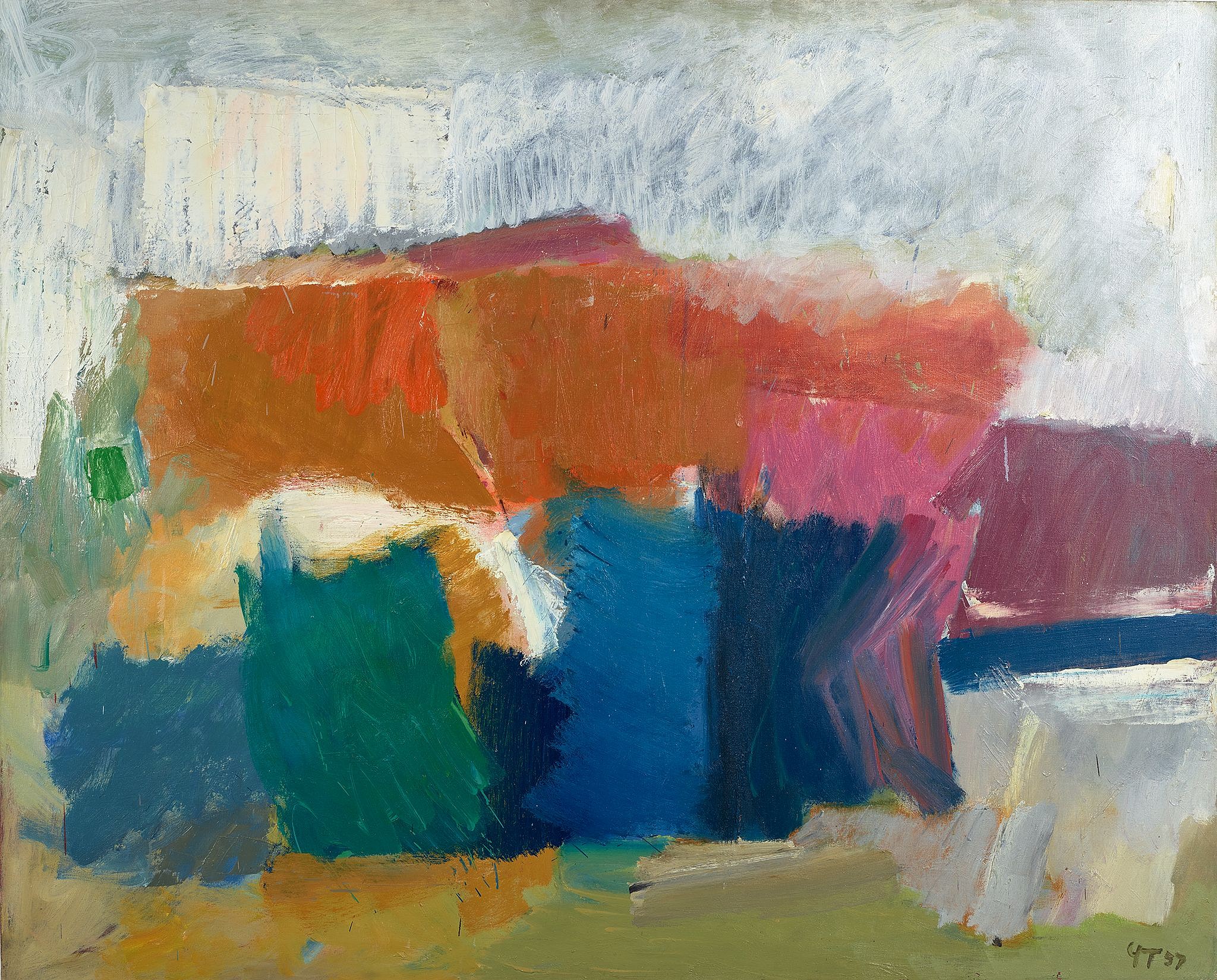 NEW YORK, NEW YORK, AUGUST 3, 2017 – Berry Campbell is pleased to announce an exhibition of paintings by YVONNE THOMAS (1913-2009). The gallery will present thirty-one paintings from 1950-1962. Berry Campbell is now representing the Estate of Yvonne Thomas. The exhibition opens on September 7, 2017 and runs through October 7, 2017, with an opening reception on Thursday, September 7 from 6 to 8 pm.

Throughout a career lasting over fifty years, Yvonne Thomas blended the intuitive freedom of Abstract Expressionism with the symbolic language of form and color. As she stated: “Variations on these two movements have continued and merged into a sense of adventure and invention.”[i] For Thomas color was the “strongest joy and enigma,” and she used an expressive range of pigments in works that progressed logically in series, often conveying her emotional responses to the spirit of nature.[ii] Dedicated with serious focus to art from the late 1930s until her death at age 95, Thomas was one of few women to be part of the first-generation of Abstract Expressionists. A member of the intimate inner circle of artists who were at the heart of the movement, she attended the historic Subjects of the Artist School (1948–49) and was invited to join the exclusive Artist’s Club (known as “The Club”). She exhibited in prominent galleries of the day—including Stable, Tanager, and Betty Parsons—and was represented in all five of the New York Paintings and Sculpture Annuals (held in a temporary gallery on New York’s 9th Street) as well as the seminal 9th Street Show of 1951. A distinctive aspect of Thomas’s identity is that she spent her first twelve years in her native France and always felt a connection with the art and culture of Europe. This background gave her a special closeness with the other émigré artists of the time—Willem de Kooning and Marcel Duchamp were among her close friends—but she always considered herself American and saw her work as a manifestation of the place where she lived and worked.

Like other women associated with Abstract Expressionism, Thomas didn’t receive as much exposure as that of her male counterparts. It is only recently that the movement’s women are being recognized, in exhibitions such the 2016–17, Women of Abstract Expressionism, organized by the Denver Art Museum; Thomas’s work was featured in the show’s catalogue.

Born in 1913 in Nice, Thomas arrived in the United States in 1925. Her family settled first in Boston before moving to New York, where she studied briefly with Alpheus Cole at Cooper Union before the Great Depression struck. In order to support herself, she turned to commercial work in fashion illustration. In 1938, she devoted herself to art, studying at the Art Students League with Vaclav Vytlacil, taking private lessons in portraiture with Russian painter Dmitri Romanovsky, and attending the Ozenfant School of Fine Art, named for the French originator of Purism. Through the Ozenfant School, she became increasingly drawn to contemporary art.

In 1948, she experienced a breakthrough, when she was introduced by Patricia Matta, the wife of the artist Roberto Matta, to the Subjects of the Artist School, founded by William Baziotes, David Hare, Mark Rothko, and Robert Motherwell. There, meeting in a loft at 23 East 8th Street without formally scheduled classes, students were considered “collaborators”; they worked alongside all four of the founders at once, investigating “the artistic process, its modern conditions, possibilities and extreme nature through discussions and expression.”[iii] At the School, Thomas “felt she had finally come home!” and it was in its context that she met de Kooning, Lee Krasner, Duchamp, Philip Guston, Clyfford Still, Ad Reinhardt, and Barnett Newman.[iv]

The school stressed the idea that subjective feelings are the only “subjects” for an artist to depict. Grounded by Motherwell in the principles of psychic automatism, deriving from the Surrealists, Thomas sought to paint in a free and fresh way, as if form and color were autonomously materializing from her brush. Thomas later recalled that she “changed from academic discipline to pure Abstract Expressionism. . . The work is authentically of the time. Its spontaneity is close to my temperament. There is no influence of other artist’s imagery, except for intellectual and philosophical ideas.”[v]

The concepts taught in the Subjects of the Artist School resonated further for Thomas in the summer of 1950, when she studied in Provincetown, Massachusetts with Hans Hofmann, who gave her “the courage of color.”[vi] As noted by art historian Robert Hobbs, Hofmann’s “painting sessions were particularly rewarding for Thomas who was alerted to the emotive potentialities of color, the need to work contrapuntally in terms of positive as well as negative spaces, and the significance of taking the overall dimensions of a given canvas into consideration as key compositional elements.”[vii] The palette she developed in the early 1950s stemmed from her first memories, when she recalls being rocked in a cradle beneath “the cloud-yellow Mimosas, orange trees, and a pale green Eucalyptus in her grandmother’s Provencal garden.”[viii] These colors exude from works such as Summer Day and Summer Day II (both 1952) in which Cubist structural elements, the legacy of the art of Ozenfant, still linger. By 1954, Thomas was using a freer, more gestural handling in paintings such as Transcendence (1954), in which pale yellows and spiritualized silver grays seem at once those of diffused sunlight and the glows from halos in Renaissance paintings.

When Thomas exhibited her work in a group show in 1954 at Tanager Gallery (an artist’s cooperative), Stuart Preston noted in the New York Times that she, along with Miriam Schapiro, were “both talented and comparatively unknown.” He described Thomas’s paintings as “non-specific emotional moods in a language of restless brushwork and fitful color.”[ix] Dore Ashton wrote: “Yvonne Thomas . . . conveys a landscape feeling in her oils. She paints in an extremely low keyed palette—cool yellow, slate blue, earth pink—and holds her forms in closely related surface planes. Hers is a delicate, very subtle intonation, adjusted to atmospheric rather than energetic force in nature.”[x] Greater tension is present in Thomas’s paintings of 1955–56, in which she appears to have given the canvas center gravitational properties, resulting in tense arrangements of shapes that collide or strive for steadiness and wholeness. When Thomas was included in an eleven-artist show at the Riverside Museum in 1955 (with Milton Avery, Franz Kline, and Kenzo Okada), Howard Devree took notice of her “vigorous loose color arrangements.”[xi]

Thomas had a one-artist show in 1954 at Hendler Gallery in Philadelphia; her first New York solo exhibition occurred two years later at Tanager. In her review, Ashton stated that the “paintings are executed in a summary style, in which clear colors are applied in sweeping thin washes,” while noting that Thomas’s most “recent canvases are genuinely fresh insights.”[xii] In a series from 1956, Thomas dispensed with thin paint, giving the picture plane solidity with more densely painted architectonic forms locked in puzzle-like configurations, as in Highway II (1957), whose sage green, grays, and ultramarine blues are suggestive of the heaviness of the approach of dusk. A lighter mood is present in Thomas’s paintings of 1959 such as Wind and Tree Tops, their titles conveying her strong connection with nature. At the end of the decade, bright yellows are more apparent in her art. She called yellow her “favorite and obsessive color” and noted it was one she used when she felt the need to switch gears.[xiii] In Lanzarote (1959), named for a Spanish island that Thomas visited, an anxious scrawl of black marks is juxtaposed with the warmth of a yellow orb, whose strength is conveyed by the way it presses against a tight enclosure. When a show of Thomas’s work was held at Esther Stuttman Gallery, New York, in 1960, Donald Judd reviewed it for Arts Magazine, writing, “Wide brush strokes and sweeps of color glissade to the plane of the bare canvas. The paint and canvas are identified with one another and continued into each other, and the consequent speed and thinness of the surface engender the clarity and singleness of the poetry.”[xiv]

Beginning in the 1960s, when Pop Art gained dominance, abstraction received less attention. Nonetheless, Thomas steadfastly pursued dimensions of abstract painting in the decades that followed, changing the variables of her work when she achieved a particularly expressive result. She also continued to exhibit often, in both solo and group exhibitions. Individual shows of her art were held in 1968 at the University of Colorado, Boulder; in 1973 at Louisiana State University, Baton Rouge; in 1982 at the Aspen Institute for Humanistic Studies, Queenstown, Maryland; in 1984 at the Washington Art Association, Connecticut; in 1985 at the Maison Française of Columbia University, New York; and at various galleries from the 1980s through the early 2000s. Many of her paintings belong to prominent public collections, including the National Gallery of Art, Washington, D.C.; the Guggenheim Museum, New York; Atlantic Richfield, Los Angeles; and New York University, Loeb Center and Foundation for Art and Preservation in Embassies.