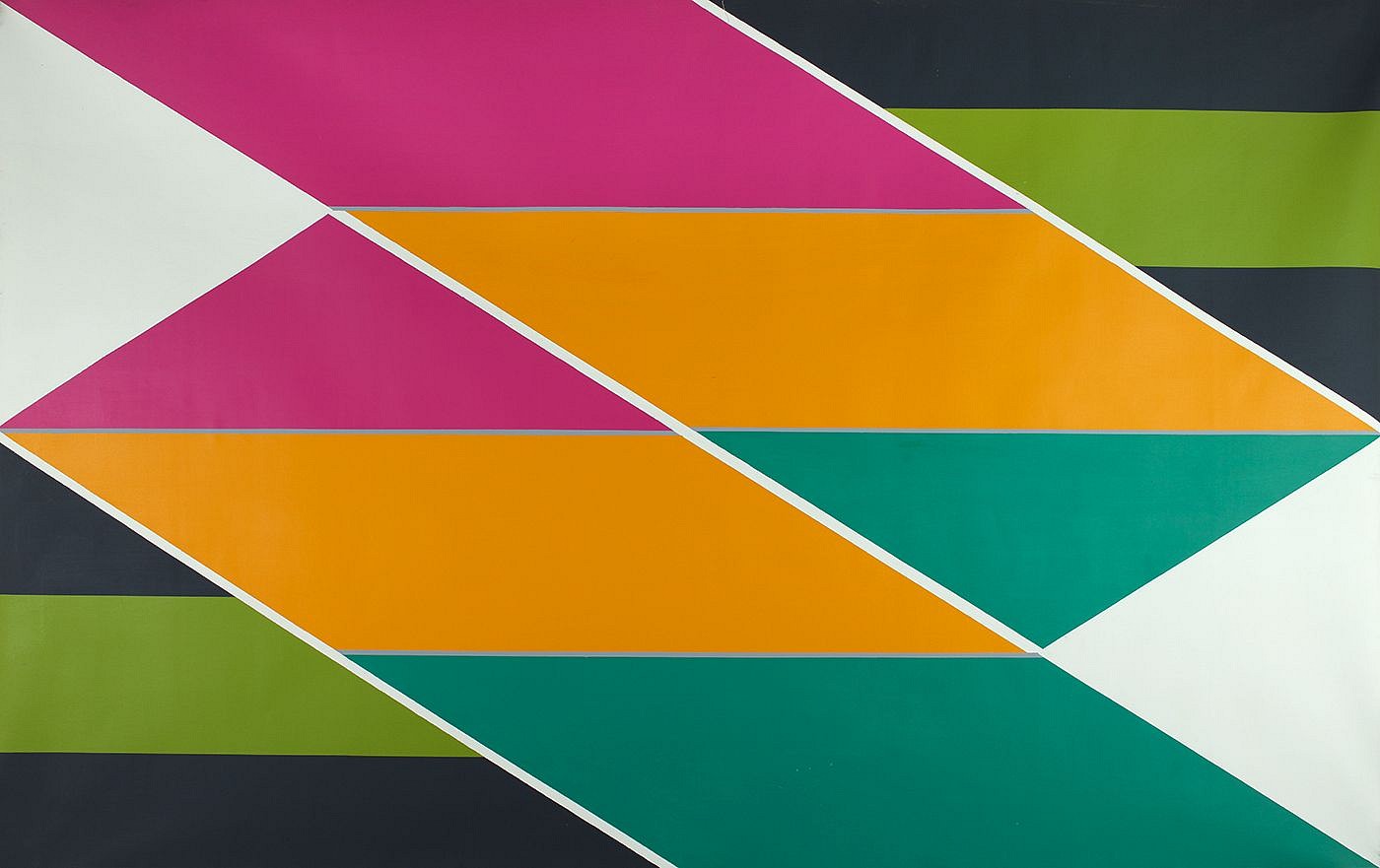 A PAINTER who played an essential role in the Color Field discourse of the 1960s and 1970s, Larry Zox is best known for his intensely and brilliantly colored geometric abstractions that question and violate symmetry.1 Zox stated in 1965: “Being contrary is the only way I can get at anything.” To Zox, this position was not necessarily arbitrary, but instead meant “responding to something in an examination of it [such as] usingâ€¨a mechanical format with X number of possibilities.”2 What he sought was to “get at the specific character and quality of each painting in and for itself,” as James Monte stated in his introductory essay in the catalogue for Zox’s 1973–1974 solo exhibition at the Whitney Museum of American Art.3 Zox’s robust paintings revealâ€¨a celebrated artist and master of composition who is explored and challenged the possibilities of Post-Painterly Abstraction and Minimalist pictorial conventions.

Zox began to receive attention in the 1960s when he was included in several groundbreaking exhibitions of Color Field and Minimalist art, including Shape and Structure (1965), organized by Henry Geldzahler and Frank Stella for Tibor de Nagy, New York, and Systemic Painting (1966), organized by Lawrence Alloway for the Solomon R. Guggenheim Museum, New York. In 1973–1974, the Whitney’s solo exhibition of Zox’s work gave recognition to his significance in the art scene of the preceding decade. In the following year, he was represented in the inaugural exhibition of the Hirshhorn Museum and Sculpture Garden, Wahsington, DC, which acquired fourteen of his works.â€¨

Zox was born in Des Moines, Iowa in 1937. He attended the University of Oklahoma and Drake University, Des Moines, Iowa, and then studied under George Grosz at the Des Moines Art Center. In 1958, Zox moved to New York, joining the downtown art scene. His studio on 20th Street became a gathering place for artists, jazz musicians, bikers, and boxers, and he occasionally sparred with visiting fighters. He later established a studio in East Hampton, a former black smithy used previously by Jackson Pollock.

In his earliest works, such as Banner (1962) Zox createdâ€¨collages consisting of pieces of painted paper stapled onto sheets of plywood. He then produced paintings that were illusions of collages, including both torn- and trued-edged forms, to which he added a wide range of strong hues that created ambiguous surfaces. In paintings such as For Jean (1963), he omitted the collage aspect of his work and applied flat color areas to create more complete statements of pure color and shape. He then replaced these torn and expressive edges with clean and impersonal lines that would define his work for the next decade.

From 1962 to 1965, he produced his Rotation series, at first creating plywood and Plexiglas reliefs, which turned squares into dynamic polygons. He used these shapes in his paintings as well, employing white as a foil between colors to produce negative spaces that suggest that the colored shapes had only been cut out and laid down instead of painted. The New York Times in 1964 wrote of the works in show such as Rotation B (1964) and of the artist: “The artist is hip, cool, adventurous, not content to stay with the mere exercise of sensibility that one sees in smaller works.”4

In 1965, he began the Scissor Jack series, in which he arranged opposing triangular shapes with inverted Vs of bare canvas at their centers that threaten to split their compositions apart. In several works from this series, Zox was inspired by ancient Chinese water vessels. With a mathematical precision and a poetic license, Zox flattened the three dimensional object onto graph paper, and later translated his interpretation of the vessel’s lines onto canvas with masking tape, forming the structure of the painting.

The Diamond Cut and Diamond Drill paintings followed. In these, he used regularized formats as a means of revealing how color can change our perception of shape. In a single work he often combined industrial epoxy paints with acrylic to set up tensions between colors that would not exist otherwise. Writing about works like

Cordova (1967) and Esso Lexington (1968), Peter Schjeldahl observed in the New York Times: “[Zox] is one painter whoâ€¨shows an ability to play by the rules without cramping at all an essentially romantic and exuberant sensibility.”5 In an essay forâ€¨an exhibition at Dartmouth College Schjeldahl elaborated: “Zox has clearly adapted Post-Painterly procedures and Minimal pictorial conventions to the demands of a free-wheeling, lyrical sensibility.”6 His art of the period is equated with that of Frank Stella and Kenneth Noland.

In the late 1960s, Zox’s paintings, such as in his Gemini series (1969–1972), became brushier; he often incorporated powdered mica into his paints to increase their visual effect. He explored a variety of new means of applying paint early in the following decade, including using squeegees and other large tools. With these means, he moved away from preconception, while introducing a drawing procedure in which the outside limits of a painting were determined by cutting or cropping the canvas.

In the mid-1970s, Zox created a series of paintings in which he explored lateral tensions, leaving the centers of his works blank.  He continued to stretch Color Field limits in the 1980s, combining the detachment of paint staining with gestural brushwork balanced between intuition and intentionality. He created more fluid yet still rigorous paintings in the early 2000s that were receiving critical praise when he died in 2006 from cancer.

Zox taught at the School of Visual Arts, New York, in 1967, 1968, 1977, and 1980. He was artist in residence or guest artist at many universities such as Yale, Syracuse, Cornell, and Dartmouth. His honors include a Guggenheim Fellowship (1967) and awards from the National Council of the Arts (1969) and the Adolph Gottlieb Foundation (1985). Throughout his career, Zox had annual solo shows in galleries in New York City and around the world. In addition to the Whitney exhibition of 1973 and 1974, he had solo shows at the Hopkins Center, Dartmouth College, Hanover, New Hampshire (1970), the Akron Art Institute, Ohio (1971), the Des Moines Art Center, Iowa (1974), and the Marsh Gallery, University of Richmond, Virginia (1993). He participated in many notable museum and college gallery exhibitions at venues including the Whitney Museum of American Art, New York; Vassar College, Poughkeepsie, New York; the Palm Springs Art Museum; the Solomon R. Guggenheim Museum, New York; the Charles H. MacNider Museum, Mason City, Iowa; the Des Moines Art Center; the Blanden Memorial Art Museum, Fort Dodge, Iowa; and the Muscatine Art Center, Iowa.